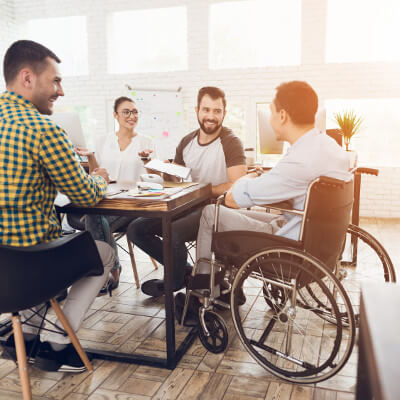 Trampoline CDD is what is it?

A brand new opportunity has just appeared on the French labour market: the CDD Tremplin. While everyone is familiar with the terms and context of the traditional fixed-term contract, this particular variant of the contract, which is only a few weeks old, is quite different and still relatively unknown to the French. However, it will soon gain in popularity. Revolutionizing labour law, this contract was instituted by article 78 of the Law of 5 September 2018. Entitled "Pour la liberté de choisir son avenir professionnel", this legislation, which recently came into force in France, provides for better support for companies in the recruitment of employees with disabilities. So what does this new device offer?

Under what conditions can a CDD Tremplin be signed?

This contract is therefore only addressed to structures, approved adapted and voluntary who wish to recruit employees with disabilities by offering them a fixed-term contract. The duration of the contract must be at least four months and not more than two years. A few weeks ago, a call for candidates was launched.

What are the objectives of the CDD Tremplin?

The main objective is clear: to reduce unemployment among people with disabilities, including long-term unemployment. This is 2018 and we believe we have eliminated discriminatory barriers to hiring. It is true that great progress has been made in this area in recent years. But difficulties still remain, especially for people with disabilities. Today, recruiting an employee with a disability remains a relatively complicated process for most companies. It is precisely for this reason that the creation of the CDD Tremplin was intended. This system thus enables people with disabilities to develop their skills and talents by gaining new professional experience. In addition, with this type of contract, it is also possible to have access to rewarding training thanks to better support, fully individualized and adapted to the needs of each individual. The CDD Tremplin is therefore undoubtedly a completely new and innovative contract for the French labour market.

Training on CDD: what the first results show?

When was the first contract signed?

The very first CDD Tremplin was signed on November 7, 2018. Recyclèa, a company operating in the reuse of computer accessories and equipment, is the signatory company.

The experiment continues in the rest of France

This system is still in its infancy. It is still early to draw conclusions about its future. The experimentation phase must therefore not be neglected in order to be able to judge the feasibility and practical application of this new contract. Currently, six regions are being tested. A total of 200 permanent contracts have already been signed by no fewer than 23 adapted and voluntary companies. In terms of hiring, the government's ambitions are to recruit 40,000 people with disabilities by 2022. There is still a long way to go, but we can already salute this beautiful human initiative, which seems to be on track to succeed!

CDD Tremplin: how it works in detail?

What are the conditions under which the CDD Tremplin is governed?

Under this recent scheme, working hours may not be less than 20 hours per week. In addition, to be able to claim this contract, two solutions exist. The first is to be recognized as a disabled worker. More specifically, it must be done by the Commission on the Rights and Autonomy of Unemployed Persons. The second concerns any employee who risks losing his or her job because of his or her disability. This fixed-term contract also aims to protect them and provide them with a more rewarding work environment. Salary level, remuneration at the minimum wage, or at the conventional minimum if more advantageous, is provided for.

What particular advantages does this contract give to an employee with a disability?

Recruitment under this scheme encompasses several advantages for a person with a disability. Recognition and motivation are of course part of it. The aim is to facilitate integration into society through appropriate work and contracts. At the same time, one of the most interesting advantages is the opening of rights for financial assistance from the State. This is a monthly payment made by the Service and Payments Agency (SPA). The amount of this assistance can be divided into two categories. On the one hand, the first part is formed by a fixed amount, also called a base. On the other hand, a variable amount is added. As its name suggests, it can fluctuate: it is calculated according to the number of disabled workers eligible for the scheme and who have worked during the past month. The amount for 2019 is already known: it amounts to 10,363 euros per year per position held. As for the modulated part, it will oscillate between 0% and 10% maximum of the amount of the base, depending on the conditions.

The end of 2018 therefore saw a significant change in the labour market. CDD Tremplin is still in its early stages. Still in the test phase, its future will be determined by the first results. If the time for the final assessment does not come before 31 December 2022, the date on which the experiment is scheduled to be completed, the first tests are already encouraging.