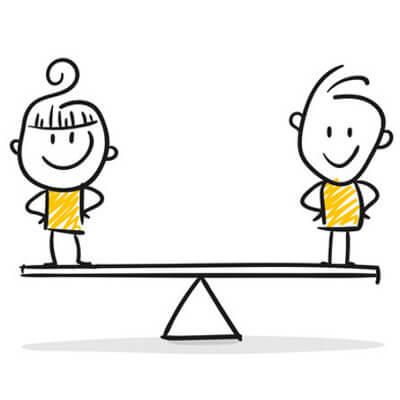 The difference in pay between men and women is 18.6%

A compilation of Dares studies points to gender discrimination

Figures from the National Institute of Statistics and Economic Studies (INSEE) indicate that the difference in male and female wages is around 18.6%. About half of this gap seems unexplained, suggesting that this is outright discrimination. These figures, published by the Direction de l'animation de la recherche, des études et des statistiques (Dares), have recently led the Minister of Labour to take action. The latter wishes to sanction companies that do not make the effort to try to close this gap. The legislation states that if this gap is not reduced within three years, the company in question may be fined up to 1% of its payroll.

For executives, the period between 30 and 40 years is decisive in career development

While in 2017 the gender pay gap between men and women in management was around 21%, it is reduced to 18% in 2018. According to the Association for the Employment of Executives (Apec), these pay gaps increase with age after the pivotal period of between 30 and 40 years. It is at this point that managers take on administrative and hierarchical responsibilities in a dynamic that is unfavourable to women. Indeed, the proportion of men in managerial positions triples between the ages of 35 and 44. At the same time, the proportion of women following a similar career path barely doubles. Maternity or part-time work, which is more prevalent among women, seems to only partially explain the phenomenon.

How to explain these gender pay inequalities?

A wage difference between men and women that appears from graduation

There are 31.3% of women with a diploma higher than baccalaureate + 3 compared to 26.4% of men, illustrating that they are more successful in their schooling. However, parity in access to managerial positions upon entry into the labour market was only achieved in 2013. This wage gap between men and women from the first job still persisted in 2016, with a 28% gap among young graduates of Sciences Po.

Moreover, wage inequalities between men and women can be explained mechanically by certain factors. On average, women work for shorter periods than men, implying a difference in income. According to INSEE, 26.4% of women, or more than one in four women, were part-time employees in 2014, compared with 5.5% of men. These figures are related to the fact that eight times as many mothers work part-time and half of them report making this choice to care for their children.

A part of this unexplained gap?

Differences in the type of contract and sector of activity

Women occupy more than 70% of the lowest paid jobs and their proportion continues to increase in unskilled occupations, resulting in some of the gender pay inequalities. In addition, 88% of women work in the tertiary sector, where average income is lowest, compared to 64% of men. In addition, a majority of women (about 60%) are employed on fixed-term contracts in France.

All the factors identified are not sufficient to explain gender pay inequalities, as indicated in the DARES report relayed by the inequality observatory. Differences in working time, contracts or skill levels do not explain the residual wage gap of around 9%. The latter seems to be pure discrimination.

At the end of 2017, Apec and ANDRH (National Association of HRDs) published a joint survey showing that the wage gap between men and women in management is independent of the feminisation rate in the sector concerned. Indeed, in the field of human resources, 80% of managerial positions are held by women. However, the latter are much less paid than their male counterparts. These gender pay inequalities reach 12% of the median wage in development jobs, 15% in administrative functions and up to 20% for managerial positions.

The proportion of women in management positions in the human resources sector is about 60%. For example, in another less feminised sector such as industrial production (15% of women hold managerial positions in this sector), the wage gap between men and women in management positions is reduced to 9%. Here again, these wage inequalities between men and women are correlated with age and tend to increase in the second half of a career.

Eliminating gender pay inequalities would be beneficial for the economy

Strengthen the economy by reducing the gender wage gap

The cost of the wage gap between men and women for French companies would amount to 62 billion euros per year. The Concorde Foundation, an independent think-tank, says that the elimination of gender pay inequalities would have significant beneficial effects on the national economy. The impact on revenues of income tax and social and employer's contributions would generate a gain of €33.7 billion. This would be compounded by the effects on savings ($6.16 billion) and consumption ($21.98 billion). These estimates are enough to seduce the state since the revenues generated would amount to 168.74 billion euros over a five-year period.

A very slow evolution in practice

Despite these potential benefits for the State budget, the situation is evolving particularly slowly. A report from the World Economic Forum (WEF) shows that this objective could be achieved in 170 years, in 2186. The GEF has used indicators such as economic opportunities, education, health and political empowerment as a basis for its work. The potential for reducing inequalities has thus been assessed in the various economic sectors including labour. The drafting and implementation of new laws does not seem to accelerate this evolution since three laws in favour of gender equality have already been promulgated in France since 2006.